I love SRAM, I really really do… their appearance on the market was just the ticket for all those folk who felt that Shimano offered a wide range of disposable (albeit clean-running) components. For most road riders Campagnolo has always been the goal, the nirvana around which a dream bike would be built… but for practical and financial reasons that was often just a pipe-dream. This was even more important for mountain bikers who had no real option to Shimano after Campag’s short -lived dabble with the dark side, as they had no option to Shimano.Then SRAM arrived.

SRAM have shaken up the market and offered a really good quality range (for road and MTBs) at a price point that competed happily with Shimano… and the top-end SRAM kit (Red and XX) has performed brilliantly at the pro-end of the market… and a lot of people have jumped ship. The knock-on effect has been subtle, but this year you’re seeing the difference. The uplift in Shimano quality and the rate at which they are trickling down the technology from the top-end is increasing – my new Ultegra 6800 groupo is beautiful and, despite huge reservations when I ordered the Sempre with this, it’s the first time that I’ve felt comfortable knowing that my steed was Shimano’d. From the Campga side, you only have to look at the number of ‘noemal’ and more ‘entry-point’ bikes running Campagnolo set-ups to realise that they are desperately trying to keep a foot in the door, and not lose ground to SRAM.

So a big cheer all round to SRAM for improving the market for bike components… which brings us back to jockey wheels!! Ever since I’ve been riding a bike, I’ve never had a Shimano jockey wheel jam solid, I’ve replaced them as part of an overhaul, but they’ve always managed to continue turning after even the lightest routine wash (and they’ve seen a lot of mud over the years). So I was a little suprised when both jockey wheels on the SRAM X7 on the Anthem decided to jam solid… I’d been out for a spin in the damp last weekend, so the bike had had a good wash, and I was just heading out to help some Scouts around the Fosse Way when I spotted the issue… and it was an issue. I couldn’t free the jockey wheels with my fingers, so the only option was to whip them out, strip them apart, clean out the bearing, regrease them and reinstall them – all in record time. I guess it wasn’t any great shakes, but jockey wheels should carry on turning until they fall apart, shouldn’t they, they shouldn’t jam solid?

I’ve just ordered some replacement jockey  wheels, not SRAM, but SRAM-compatible, so fingers-crossed this won’t happen again. But I still really like SRAM!

The replacements have turned up – they’re not SRAM originals, so let’s see how they go. 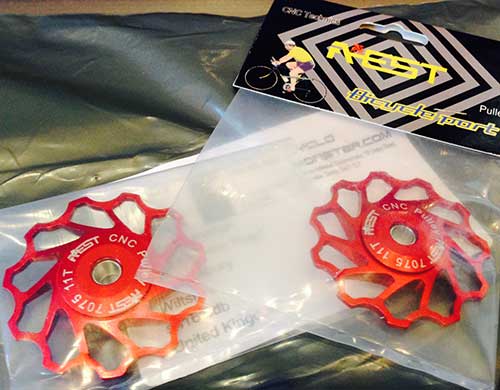