This was the third race of the season at Hengrove, held here after Bath Council (allegedly?) took issue with the Odd Down track being used for a cyclocross race, so forced that to be cancelled. It should be said that this Western Cyclocross League is brilliantly organized and many thanks go to the team that stepped into the breach here to continue the series every week… absolutely marvelous!! 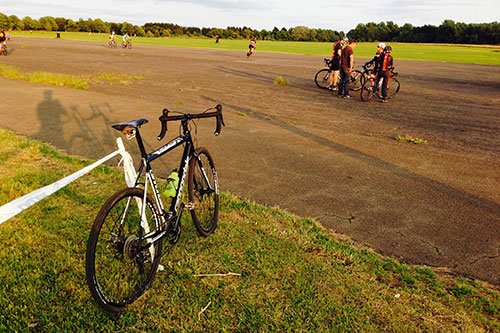 Hengrove is now familiar turf, literally, being fairly flat, but with lots of strength-sapping grass. Fortunately the wind was blowing in the right direction this time, so the stretch of tarmac around the start line became a fast blast and a chance to catch your breath.

For any numbers of reasons that I won’t go into, I was much later arriving last night than for previous races and I had less than half an hour to get unloaded, sorted and take a very quick look at the course before the race started. By rights that should have worked against me, but last night’s race went totally to plan and panned out as a good fast run.

Having seen a 105-specced Cannondale CAADX take top honours in a class last week, I’ve been thinking about up-speccing my CAADX instead of upgrading the Kinesis, so I decided to give the CAADX a spin to see how it faired in a race… and it was brilliant. Really comfortable and surprisingly quick – which dashed any criticisms I might have had previously about whether the CAADX had ‘real’ race credentials. 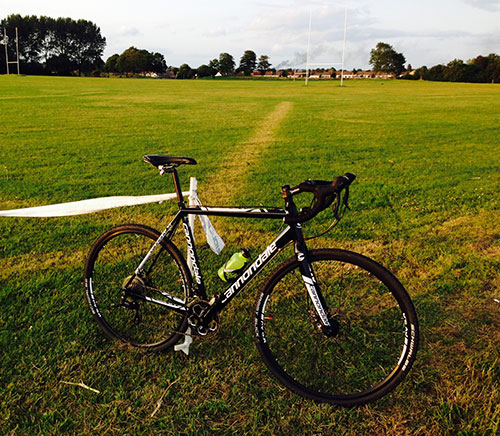 Last night’s course ran anti-clockwise again and covered much of the familiar ground to previous races. To add to the fun the organisers had trailed the route around the trees in a couple of places, which included a couple of sharp uphill off-camber corners, and an interesting extended ‘S’ around a maze of tapes on one of the straights. It was probably those slightly more technical bits that slowed the faster riders and allowed my mountain bike skills to show some merit that kept me closer to be being in touch with other riders, than in previous races.

Overall it felt like a good performance and it felt as though I was setting the scene nicely, in terms of my fitness, for my first season of winter cyclocross…

Now to look at how to make the Cannondale lighter…