In 2013 Shimano updated their Sora groupset from version 3400 to 3500 and at last those thumb-shifters have gone… but Shimano Sora is still 9-speed, so how much better is it? I’d suggest that it’s a quantum leap forward in capability.

The Shimano Sora sits near the bottom of their range of road groupsets, and is arguably the lowest of the groupsets that most people would put onto heavily used bike, whether that’s a weekend warrior or an everyday commuter. With some really competitive pricing out there you can order a full Sora 3500 groupset for just over £200, but it’s probably easier to look at the pricing across a range of bikes – the Cannondale CAADX starts at £799 for the Sora model, steps up to £899 for the Tiagra version and then £999 for the 105. So the pricing difference isn’t massive, but is an extra £200 good value on, what for many will be, a second-bike. As a winter and commuting set-up I think that Sora offers a really neat proposition.

In terms of weight, I reckon the Sora set-up carries a weight penalty of just over a kilo compared to the 105. In a real-world set-up, Merlin show weights of 9.75kg and 11kg respectively for their 105 and Sora equipped x2.0 cyclocross bikes.

I’ve got over 100km under my belt on the Cannondale CAADX and I’m pretty happy with the double chaninring Sora set-up – to be clear the CAADX just has the Sora brake shifters and front & rear derailleurs, with the cranks coming from FSA. The biggest plus for me is that Sora now has the full STI functionality, which has finally got rid of those little thumb-shifters. What this means is that all of your up and down shifts are done with the brake-lever (and lever behind it) being pushed inwards. It makes for really easy shifting and, on a bike like the CAADX that encourages you to be down on the bottom of the bars, the upshift (to go faster) is just a finger-flick away. What’s impressive is that the action isn’t far off the Ultegra 6800 gear-change, and that’s the slickest groupset I’ve ever owned by a country-mile.

From a quality perspective, it’s obviously very early days for me, but it’s a mid-range Shimano groupset, so it’s fairly safe to say that this will be bomb-proof. Shimano will have taken much of the quality from the 105 and Tiagra groupsets, and trickled it down to Sora. So we’re not talking about cheap pressed steel components and visually it looks well made. Equally it won’t require the more regular tweaking that you’d need for the top-end race kit, so as long as you keep on top of the lubes (every week or so, and definitely after a wash), the Sora groupset should keep on turning day-in-day-out through the winter. 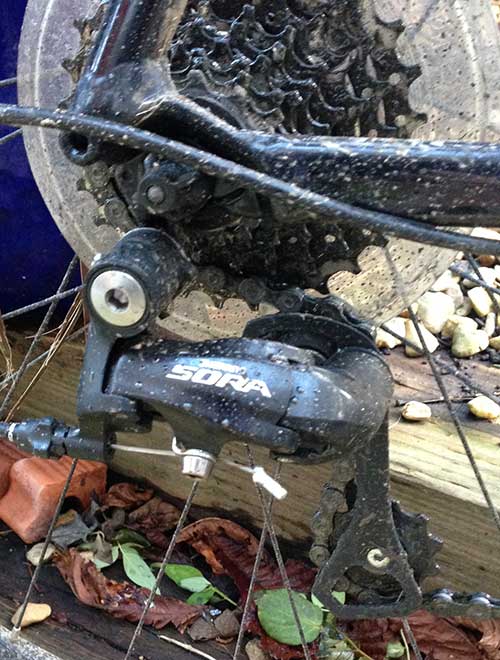 One thing that I think the 9-speed set-up definitely has to its advantage on a winter/commuting groupset is that there are clearly bigger gaps between the rear cogs. While the whole set-up should be simpler, it also means that there is less likelihood of mud and other road muck clogging the gaps and affecting the performance of the gears and gear changes. It should also be easier to clean, so it should be harder wearing and more reliable in the face of a normal UK winter.

So Sora ticks the practicality box as well. 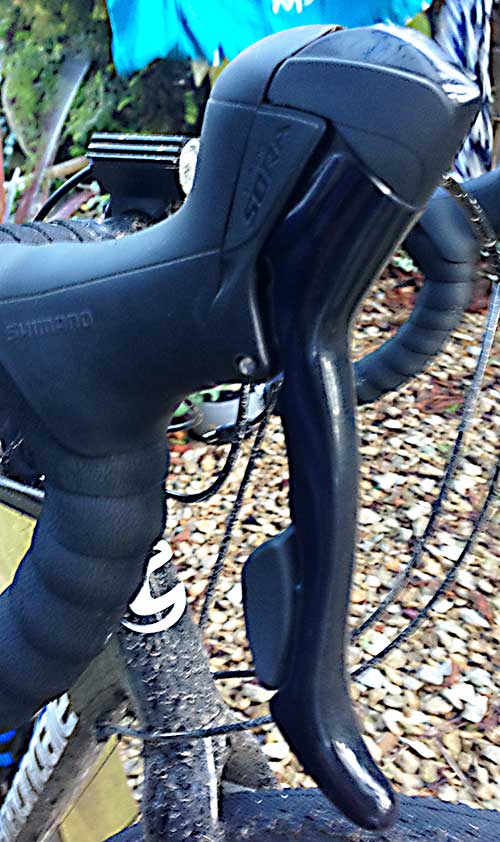 The only issue that you might have with a 9-speed set-up is that the gear spacing means that sometimes you have to work your legs harder, because you might not have ‘quite the perfect gear for the conditions’. But we used to survive on 5-speed derailleurs, with no double or triple crankset, and it’s the winter, and to be honest suffering a little in the winter will pay dividends in the spring.

Overall then, if you’re looking to save a few pounds (in money) on a bike, then opting for Shimano Sora instead of Tiagra or 105 might not be the deal-breaker that maybe it once was… no thumb-shifters, that’s a result!

Update 10th July 2015 – I raced the CAADX in the Western Cyclocross League last Wednesday and the Sora group set worked impeccably. During a race, I’ve found that any issues with the running of the bike are magnified ten-fold and I’ve been using my old Kinesis fitted with SRAM for the earlier races, on the belief that a single gear lever was easier. However the CAADX and Sora proven me wrong – they performed so smoothly that it’s convinced me to lose the weight on the Cannondale, ahead of the winter racing, with a Shimano 105/Ultegra upgrade, rather than going the SRAM Force route. Another big thumbs-up for Sora. 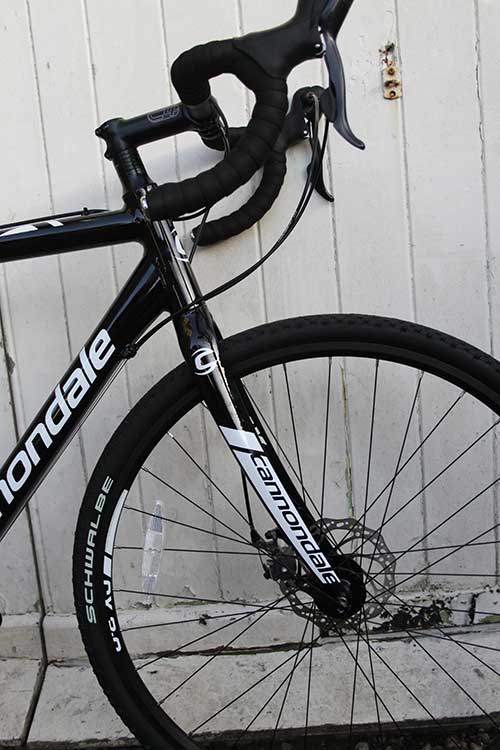