I’ve always suffered with numbness in the hands during an extended ride and have tried to solve the problem with a variety of different gloves, with mixed results. However, a looking 4-hour XC race in November (2013) meant trying a new tact. Suprisingly, the set-up that’s worked best to date has been some simple On-One lock-on grips, but even this was proving ‘achy’ after two hours riding, so that meant a serious look at the Ergon range.

Ergon have been producing their broad, alternative-looking grips for some time now, and they’re probably percieved as being at the ‘touring’ end of the cycle spectrum – so, let me correct this perception.

Ahead of the XC race I bought a pair of the standard Egron GP1 Biokork grips – these are their simplest model and they replaced the old lock-on grips and let me retain my BBB bar-ends. I chose the Biokork version for two reasons:

A – I assumed that the cork would give some additional comfort over the moulded versions.
B – They look pretty cool, albeit not as racy as the lock-ons (In your humble opinion – Ed).

Fitting was easy, they only have a locking ring on the outside end, but that seems to be very secure. 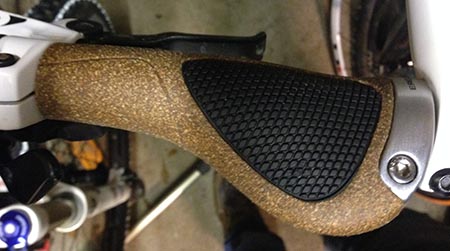 I was concerned that putting a broad winged-type grip on a mountain bike would compromise the ability to hang on to the handlebars, but in reality this isn’t an issue and your natural grip (the strong part with the thums and forefingers) wraps firmly round the Ergon grip… no problem there.

The first ride out on the Ergon grips was two and a half hours, and that proved to be completely pain-free. I was expecting them to be comfortable, but I was suprised by exactly how comfy they were. Two weeks later I did the first round of four-hour Brass Monkey XC race series and came off the end of that with no noticeable problems with my hands – it was a revelation.

If I have any criticism of the grips it would be that I have a habit of riding the fast flat sections with the balls of hands resting on the grips – and in that position I probably felt slightly less secure than on the old lock-on grips, but that’s an issue of my riding style, rather than the grips.

Update 14th Jan 2014 – Having used the Ergon grips over the winter for general trail blasts around places like Ashton Court, I’ve decided to switch back to standard lock-on grips and save the Ergons for those longer XC rides. The Ergons are wonderfully comfortable and are the perfect grips for extended rides, and I’d probably stick with them if I was on a long but technically challenging ride, just to stop any numbness developing in my hands. However, the problem with the grips is that, when you’re ‘on’ the brakes with your index and middle fingers, your grip with you smaller two fingers is on the widest part of the Ergon grip and that doesn’t feel 100% secure – you just can’t wrap your fingers round the grip properly. So my loose rule of thumb is as follows: