Last Sunday I borrowed a friend’s PX all in the name of research… To be fair my search for  a new bike has been ongoing for some time and the Dream Bike list has several ‘economical’ exotica on it, but Planet X have just thrown a massive spanner in the works by releasing an 11-speed Ultegra build of their Pro Carbon bike for just a penny shy of a grand. I’m a huge supporter of our local bike shops, but I’ve done the vast majority of my own maintenance over the past eight or so years, so for a bike purchase there’s a big question over whether I should opt for the ‘direct’ bike purchase. 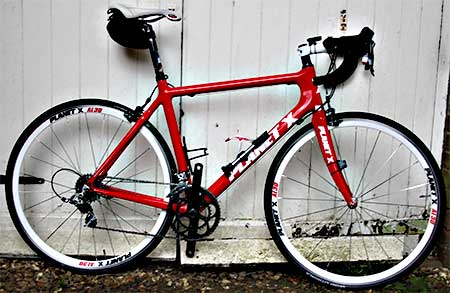 There’s also a much more profound debate to be had over whether a Planet-X bike is in line with the heritage and kudos that I’d hoped to find in a ‘special’ bike. When you consider the other brands on the dream list, such as Condor and Enigma, it’s clear that they bring a level of heritage and workmanship that’s miles away from the Planet-X proposition. However, when you consider that even the most conservative build on an Acciaio or an Esprit will be well north of that £2k, I feel duty bound to consider the economics.

Hence on Sunday, after a variety of distractions that kept me from trying the Planet-X in the sunshine on Saturday, I ended up heading out on a regular route just as the weather broke… And this is where the whole debate gets more intense.

End-to-end over a route that took me out to Tetbury, the Planet-X felt faster than my Cannondale, but the overall time was slightly slower – but I did stop several times to makes some tweaks to the seat height. So I took a look at the Strava segment times, and they were consistently faster on the PX than the ‘Dale. Now we’re not talking about a few seconds, we’re looking at times that were taking 20-30 seconds out of 3 minute segments – that’s a massive difference. I’d love to be able to say that the conditions on Sunday were way better and that I was prepared for a decent ride, but the truth is that I wasn’t… it was a last minute decision to head out, a break in a manic day of last minute family committments, and I’d forced an inappropriate lump of cheese on toast down my neck, before hitting the road as the heavens opened in a series of torrential downpours and a constant head-wind.

So, with everything against me on Sunday I was expecting a pleasant, rather than suprising, ride, but it’s thrown a massive spanner in the works.

2 thoughts on “Planet X Pro Carbon – is it a dream bike?”