Time for a little bit of science… how does a hard road ride compare to a cyclocross race in terms of effort?

I’ve been wearing a bluetooth Polar heart monitor (linked to a smartphone app via Bluetooth) for my three cyclocross races and I’ve been amazed by how hard I’m working during the race… for the full 50 or so minutes of the race, my heart rate is hovering around the red zone (Zone 5 – see below) and I’m not getting any of those ‘breathers’ that I’d get on a road ride, so I thought a comparison was a sound idea.

In the past few weeks I’ve also ‘upped’ my road rides to take in more hills, as we have a trip to the Hardknott Pass in the Lake District on the cards for the summer… so my road rides have increased in overall intensity and the Tuesday spin out to Nailsworth seemed a good ride to compare with last week’s cyclocross race in Bristol.

For the cyclocross races I have been arriving at about 18.30, getting set-up, done a few laps of the course and then murdered myself in the race, meaning that I’ve been wearing the heart monitor for around two hours – and during last week’s effort I burnt 1478 calories according to the Polar app on my iPhone. In comparision, while my road ride was longer (2.5 hours and 1777 calories), when I pro-rata’d the time, the calories came out at 1461, which you’d agree is more or less identical. So it would seem that a two hour road ride is much the same effort as a cyclocross race, but calories aren’t the whole story.

The interesting part comes when you start looking at how the heart monitor measured the effort and broke it down by exertion – Polar uses a series of five zones based around your maximum heart rate (HR), which in my case is estimated at 171bpm (beats per minute):

o – Zone 3 – 70-80% and is the level of heart rate that you’d be aiming for to maximise the benefits of general training.

So how do these map on to the two rides…

During the cyclocross race, presumably because there was a level of standing around and sorting out kit, I was in Zones 1 and 2 for just over 30% of the two hours, but this was only 15% for the road ride. That’s understandable, as I was working for the full two hours on the road. However the differences in Zones 3, 4 and 5 are stark.

This is the Polar summary of my road ride: 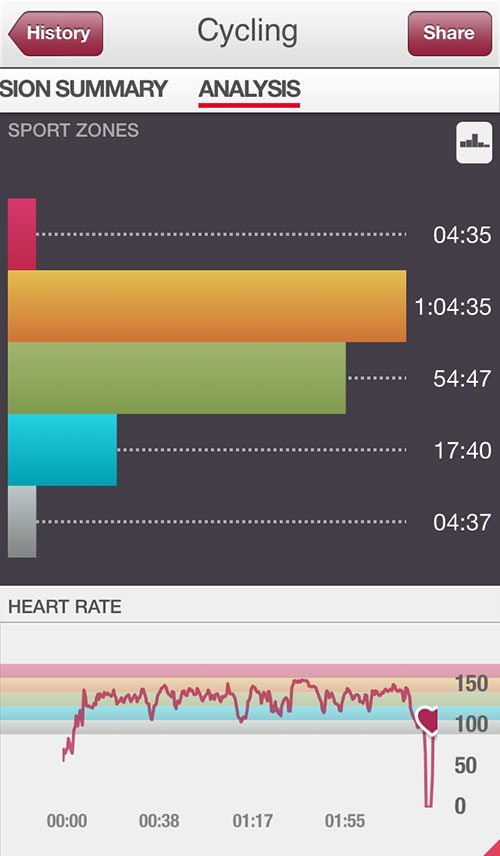 … and this is the Polar trace of my Round 4 cyclocross race: 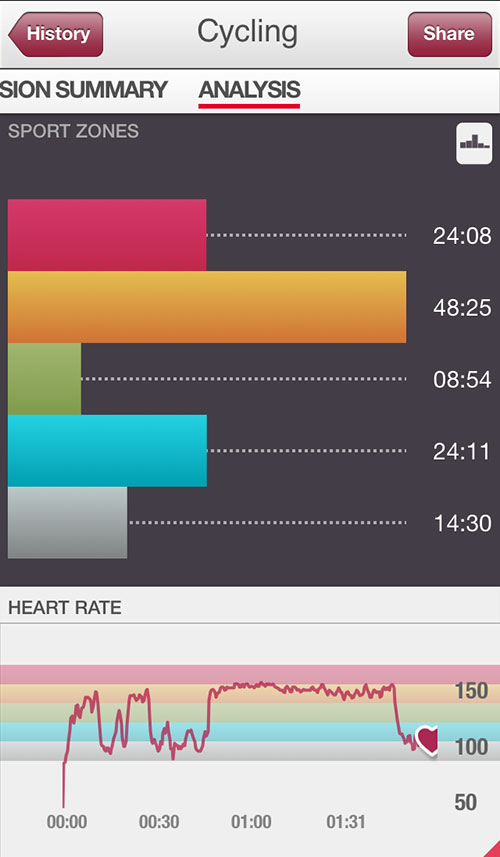 My Zone 4 percentages were very similar – cyclocross 40%, road 44% – probably due to the hills that I threw into this road ride and the effort I put into chasing up every little bump to maximise my hill training.

Zone 5, when you’re well into the hardest effort, showed 20% on the cyclocross bike and just 3% on the road bike. I find that amazing, as I threw in some big hills on Tuesday, but it just goes to show how quickly the body recovers from short bursts of exertion, and lowers the heart rate to a respectable level… unfortunately that doesn’t occur in a cyclocross race as there’s never a convenient time to catch your breath.

It’s fair to say that several hours after both events I was feeling the same level of tiredness, so the manic Zone 5 effort of the cyclocross race didn’t appear to have had a greater impact on me. But one question that this does throw up is how best to train for a cyclocross race? Sustaining 50 or so minutes of Zone 4 and 5 effort is a huge psychological challenge – and I question whether many ‘recreational’ cyclists have the mindset to punish themselves like this without the framework of a formal race environment to drive them on. Certainly, I’m not sure I do… but I’ll need to try crossing that boundary during the summer to ensure that I’m getting the right level of training ahead of the winter cyclocross season.

Note – I have my max heart rate set in the Polar app at 171bpm. That’s in line with the common estimation formulas which give figures between 171 and 174bpm. I have not done any gyms tests to verify this, but my maximum heart rate during rides, including the cyclocross races and big hill climbs, has peaked at 166bpm on one occasion, 165 on another, but generally maxes out at around 162bpm. Clearly I need to try a little harder.

Update 22nd June – I’ve had some some comments back on this from Reddit taking issue with I’m comparing a road ‘ride’ to a cyclocross ‘race’, with one comment suggesting that I should be comparing a cx race with a criterium (‘crit’). But the point that I was hoping to make is that cyclocross is one of the most accessible forms of competitive cycling avilable to a ‘normal’ cyclist, and I was hoping that this article would start to sow a seed in people’s minds that “yes, cyclocross is hard, but it’s definitely worth giving it a go”. I do take slight issue with the comment about crits, as they require a good understanding of how to cycle in a closely packed group and (certainly in my experience at Castle Combe race nights) require a not inconsiderable investment in kit, whereas cyclocross is a much more individual event that’s accessible to anyone with a decent ‘cross-style commuter.

One thought on “Road ride or cyclocross race – Which is harder?”